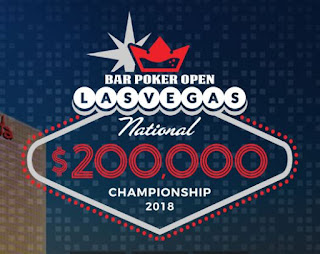 On June 6th during my annual trip to Las Vegas with Pikes Peak Poker I placed 15th out of more then 1,200 entrants playing Texas Holdem Poker.
I posted some of this on Facebook as soon as it happened.  I wanted to put more detail on my blog.

Unfortunately the recording starts right before I get knocked out. I'm on Twitch!  My stepson is going to be so jealous. At least everyone gets to watch my losing hand. It was fun to play such an enormous tournament at the Golden Nugget.
This year we brought about 80 Pikes Peak Poker players from Colorado Springs.
There were other events scheduled throughout the week, but my main focus was the big tournament.  One evening the whole league met at Nacho Daddy for drinks and snacks.  That place is a blast.  On a previous trip I swallowed a scorpion (yes on purpose).

On a different night a few of us made it to Top Golf for some driving range fun.  I had never been to that place before and we had so much fun.  I am not as bad at Golf as I remembered. We had to start really late because there was a private party.  We split into two groups we had so many people.  When I found out that they have Top Golf locations in Colorado.  I definitely plan to make a trip soon.

The only way in North America to play Bar Poker for $200,000 is through BPO Leagues! This record breaking championship is not open to the public, it is only open to those who have qualified through their local leagues. Pikes Peak Poker has been part of Bar Poker Open for 3 years now.
Check out the BPO Website

I have been playing free bar poker for several years now. I even met my wife playing poker.  BPO lets me play for large prizes without risking a large buy-in.

Don't misunderstand.  I play all sorts of poker for different stakes.  I have actual cashed once for even more money in 2016 at a tournament in Blackhawk Colorado.
View my profile on the Hendon Mob

Popular posts from this blog

Pikes Peak Poker
Pikes Peak Poker reached out to me because their old website needed a refresh.  So I made them this.  I tried wix.com for the first time because I had heard so many good things about them. I needed to see for myself.   I really like the fact that you can create a custom data base to be used throughout the website.   I like the shopping cart. I surprised to find out, after signing up to be a Premium member that many of the add on apps in the app store cost extra. This was disappointing because the shopping app by itself only accepts 2 forms of payment, Paypal and Square. I'm still trying to figure out a way to expand that.  I think I might link back to Facebook for the shopping part.  I am always making tweaks and improving the feature of the website so that it is never completely done.
What do you think?   Leave suggestions in the comments and maybe I will include them in the next update.
Mike
Read more
July 27, 2018

I passed!  I had so many plans for this Blog.  I know blogging is so old school.  There has been so much going on in the last few months, but the most exciting is that I started studying for the CISSP exam.  I passed the exam on July 7th and I am currently waiting for the endorsement process to complete.  This exam took several months of studying.
Cybray was a huge part of my studying.  The best part is it is completely free.
Check them out at:
https://www.cybrary.it/
They provide training for all levels of Cyber Security.
I also paid for the Boson practice exams.  http://www.boson.com
Back in the day when I obtained my MCSE, CCNA, and ASE I always used the Transcender tests.  That has become Kaplan IT now.  Boson provided a great way for me to judge my progress and identify what areas I needed to concentrate on.
There were a few other free resources.  I would have anything CISSP related running on Youtube.com when ever I could play a video.  I have no real specific recommendation, b…
Read more

Mike Capela
Yes, I will fix your computer. Technology fan that gets very excited about gadgets and gizmos. I also like fixing stuff. Once I even fixed Tank Turrets in the Army. MCSE+I, HP ASE, CCNA, Secuirty+, CISSP